An hours long conversation with my Uncle about how nervous and excited I am to start boarding school in the Fall has ambled into quiet. I think about how supportive my Uncle is of what for my family is a completely unorthodox decision to leave home at 15. Goodbye Yellow Brick Road plays in the silence between us, and I appreciate the time with a man I admire and trust.

My mother knocked it out of the park this year for Christmas, gifting me two tickets to see Elton John’s Farewell Yellow Brick Road concert this past Saturday at the Los Angeles Forum. The music was spectacular, the spectacle less ostentatious than others I’ve seen perform there, but I told my friend: this was about more than music, this was about the man.

There’s something arrogant in the idea of a farewell tour. To think that one is so great that they deserve to decide when they’re finished, and that they should get to see the crowds chant their name one last time in full knowledge of that. To get to be Tom Sawyer at your own memorial, in a way. Elton John is the rare artist who transcends the hubris of the concept, in his case going on this farewell tour is an act of grace and kindness.

A sloppy college party, like so many others. While rap music plays from one end of the room, a friend and I ignore it and block it out as we connect over shared love of the movie, Moulin Rouge, and begin crooning the words to Your Song to one another. 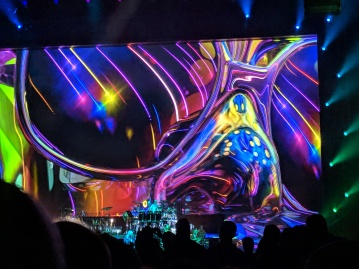 Elton John’s body of work is not just the music, after all. What we’re saying goodbye to was a singer/songwriter who used that artistry, platform, and success to do so much more. Not only was his music an overall message of inclusion, love, acceptance and social progress that stands as progressive even to date, but outside of music his foundations did much to advance research in AIDS/HIV prevention, and so much more.

My friend is a punk rock fanatic. If I’m anything, I tend towards hip-hop as my primary music genre of choice. Both of us love Elton John. Both of us had songs that got us out of our chairs and teary eyed. I started to wonder at a point how that is. How did a gay man from England 40 years my senior manage to write music that spans so many divides and gulfs?

Classic thinking is to write what you know. Elton distills that in his music and art to the most elegantly simple and beautiful way. He’s not writing about himself, he’s not writing about experiences or events, he’s writing about feelings. He’s distilling the feeling of loving someone in spite of knowing you can’t give them even an iota of all you think they deserve, of saying goodbye to someone you love, of realizing that life has taken you far away from home and it’s time to find a new one. 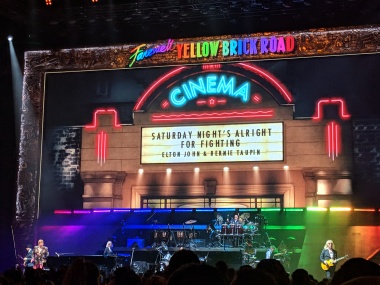 These are all universal feelings. His illustrations of them merely conduits to the feeling. As artists of any ilk, I think we all want to capture and convey emotion more than anything else, but we get mired in the thick of details of a scene rather than focusing on the elements of emotionality. What person ever laid on their back counting stars and came up with a number? I think as artists we get caught up in the numbers and counting of the scene we’re painting, or the naming of the constellations- Elton John was always focused on the feeling the infinite expanse inspired.

I’m driving down the 110 freeway in Los Angeles. It’s late and my throat is choking me holding back tears. I’d lost my job earlier that week, and then been dumped that night. Life seemed to be telling me I was worthless, and I didn’t have a good rebuttal at the moment. I put on Tiny Dancer, I sing along at the top of my lungs through the entire song. By the end of it, I feel so good about life and the twists and turns it inevitably takes that I rewind the song and play it again until I’m home.

I’m lucky I got to see him live finally. I’ve wanted to see John perform in person since I was little, and that I got to be there at the Farewell truly means the world to me. Maybe this post is just for me. Maybe so I can look back and remember everything I learned in the moment of the concert, and throughout my life loving his music. Elton ended the concert saying he’s been lucky enough to get enough fanfare and applause to last twenty lifetimes, and I truly left feeling like he’d done us one last service as an artist. Giving me the opportunity to say one last time: Thank you, Elton.