I’ve said here before that over the years of facing and learning to cope with my mental illnesses, I’ve steadily built an internal edifice of self that has recently proven its resilience to the squalls life can sometimes throw at us. Some friends I’ve used this metaphor with have guessed that it came from the BBC series, Sherlock, who  in the show visits his “mind palace.” I exercise a similar mental practice for meditation and therapy, but the edifice of self metaphor originated from something much more real.

In 1879, a postman Ferdinand Cheval was struck by the qualities of a random stone he tripped on while on his mail route. He collected it and began to collect more stones on his route day by day, adding to the collection. It went from a pile, to a small construct, and after 34 years of steady work became this: 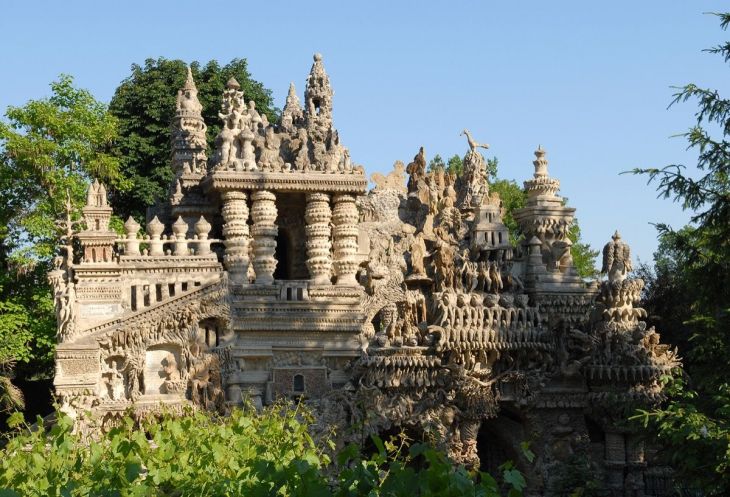 With regards to writing novels- or any lengthy work- you eat the elephant one bite at a time. I’m closing in on finishing up the rough draft of my next novel, The Spectacular Seraphim Versus the Fame Monster, and while that’s certainly true of an individual work, it’s also true of how one builds a career.

Stone by stone, word by word, blog by blog, novel by novel, I’m becoming a better writer. More than just improving, I’ve gone from this blog being a sparsely curated site to something I’m proud of thanks to its wealth of content. I now have 3 novels that can occupy your shelf space, I did that stone by stone, word by word, and it’s only been half as long as Cheval had to make that wonder above.

Stay the course. Nothing happens overnight. The stones have to be gathered and piled over length of time and maybe the pile won’t become something in itself. Maybe the pile you make and put on display is what gets you drafted to assist someone else’s grander pile.

A similar parable I’ve long relied on in this motivational spirit is the parable of the talents from the Bible. This should come as no surprise since I named my second novel for it, Five Talents. The parable goes that a master left sums(/talents) of gold with servants and came back to see what they had done. Two of the servants went out and invested, increasing the money, the third hid the money and let it sit in wait.

The lesson here in conjunction with Cheval should be obvious by now: don’t wait for the world to ask you to invest your talents in it. The master is only going to give more to invest in those who went out and invested in the first place.

I’ve been thinking about these ideas a lot of late given the start of another novel project in conjunction with my pressing onward with acting classes and my foray into podcasting. I left a lot of these stones sitting untouched for a long time because of anxiety and depression. Writing was the sole load that I never let go of to  hoist myself up by to continue building. Now that I’m at this plateau after the Cordy Trilogy, I have other passions I’ve started to gather stones for.

I don’t know where any of this goes just yet. Cheval took 34 years to build that palace, and I’ve been back in acting and making this podcast for just a few months now. All I know is that I’m enjoying the journey, step by step, stone by stone. I’ll gather a few more before I feel the need to say what I’m trying to build, if anything. Right now I love it all and that’s enough.