Because I’ve been in such a clearly cheery mood this week, I’m here with a series list thanks to my rereading of the Sandman series. It’s something of graphic novel comfort food to me, and it never fails to reawaken my faith in bringing stories and dreams to fruition through my writing. Relinquish the Ashes is a current novel project very much concerned with that concept.

Beyond dreams and dreaming though, Sandman is very concerned with the finitude of the time we are given to dream, and thus, to live. It’s one of several stories that I believe (spoilers ahead for the remainder of this listicle) is chiefly concerned with a main character facing and coming to terms with their own death: a ballad story.

This is one of those themes that really only becomes clear when you go back to revisit this one, which I have a half dozen times now. The series follows the lord of Dreaming, Morpheus, one of the seven “endless” that exist by nature of there being any life at all in the universe (Destiny, Destruction, Dream, Death, Despair, Desire and Delirium).

The story begins intriguingly enough: Dream is capture by mortal men and imprisoned for some eighty years. The rest of the series follows a lot of the impact that comes from Dream’s absence those years, and his own sense of humanity he’s acquired through knowing the hearts and dreams of mankind. 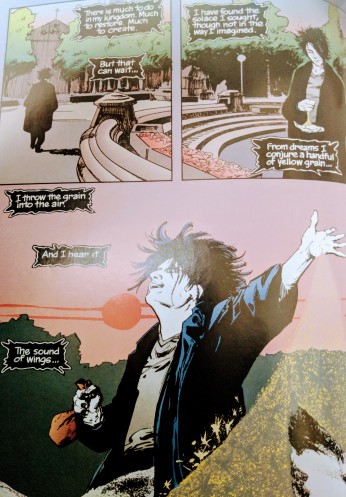 Ultimately, the story ends with the death of this “aspect” of the Dream lord (don’t worry, he’s resurrected in the form of another), but it’s one of those stories that once you reach the death of Morpheus, and his funeral, you realize everything in the story was always building up to that finality.

Just as much as Dream defines and seeks to understand humanity and reality throughout the series, it’s as much a farewell and finishing the story as it is continuing it. Sandman shows us that all stories have an end. Perhaps they can be recursive, perhaps they can have flashbacks or temporal overlaps and nuance, but they all have an ending- all dreams eventually end when we wake to a new day.

Your Lie in April

I’ll be completely honest: anytime I need a good cry, I put this series on. It’s cliche to say this by now, but I’ll say it anyway: put aside whatever preconceived notions you may have about anime, and give this one a try. Over a brisk 21 episodes this story not only artfully and poetically shows a young musician overcoming grief and trauma to get back to his music, but it also shows us why art and making the most of our lives matter: because they end.

Without a doubt, the most heart breaking and poignant fact of the story is that one of the characters who passes away at the end of the series, a violinist, loves performing. It’s a joy that motivates and keeps her going and fighting on. What breaks my heart that I only just noticed on a recent run through of the series: you don’t realize her “last performance” is her last performance until she passes away. She doesn’t get on the stage with any sense of goodbye or finality, nor does anyone look back on it and say that they remember her final recital.

Your Lie in April is brilliant in getting at the heart of how our pain halts us, but also how we accept it and keep moving on not even in spite of, but because all things pass.

I have a well worn joke at this point that you don’t really hire Denzel Washington to act as a character, you hire Denzel to play a “Denzel Character.” Man on Fire absolutely fits this bill, with washed up and whiskey soaked John Creasy fitting the bill on all fronts (but still being absolutely charming).

It’s painted pretty clearly as a ballad film from the get go. Creasy is wracked by guilt for his work as a killer, and tries taking his own life in a drunken fit of depression early in the film, but thankfully begins to be “saved” by the young girl he’s hired to be bodyguard for. When she gets kidnapped, it becomes one of the best revenge movies as Creasy systemically moves through the criminal underworld of Mexico City to avenge Lupita (played by a young Dakota Fanning).

However, as Christopher Walked puts it: Creasy’s art is death and he’s painting his masterpiece. It’s a bloodier version of Natalie Portman’s “perfect” performance in Black Swan: Creasy gives everything he has, up to and including his very life to paint that bloody masterpiece, finally grateful and willing to die for the sake of saving someone worth saving, rather than just drunken atonement.

Name of the Wind & The Wise Man’s Fear 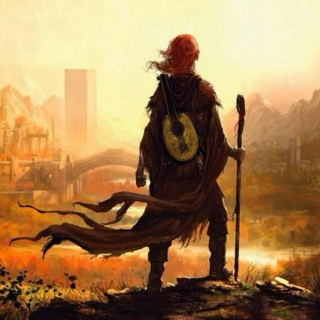 Kvothe is called out from the first pages in both books as quietly “waiting to die.” the books, if you haven’t read them, are Kvothe telling the story of his own legend firsthand to a chronicler so that the true and accurate stories about him might be remembered after he’s gone, rather than the legends that have spiraled and blown up through rumor and hearsay.

There’s a lot to unpack in the narrative as Kvothe tells it: he admits openly throughout his telling that in his younger years he was all too glad to encourage embellishments and exaggerations on his own legend, and we the reader are dared to wonder how much of it he might still be embellishing.

I recommend reading these on one hand because they’re beautiful stories, but I urge caution because you’ll join the horde of people hungrily awaiting the conclusion to the trilogy which has been seven years coming and has absolutely NO NEWS OF A RELEASE DATE.

I couldn’t resist putting one more Denzel film in here, especially because this is one of his pre-Denzel Characters roles. This film adaptation of the autobiography of Malcolm X might seem an odd choice: it’s a biopic, not so much a ballad, but this one I’m going to go with because of the clear point the film is trying to make about Malcolm’s legacy and the inevitability of his work and movement.

Especially in these times of political divisiveness, this one is well worth a revisit. It’s a powerful story of a man pushed down by American culture to the basest of existence, saved by finding the truth of the oppressive apparatus that is American culture and his work later in life to stand in opposition to it.

Malcolm’s narration of the story begins, from the outset, talking about his father: a separatist preacher who believed black people should leave America to return to Africa. Malcolm’s father was murdered by the KKK for his vocality, which is less than subtle foreshadowing of the fate that should be expected for Malcolm because of his work.

By the end of the film, with the nation of Islam marking his as an enemy, as well as the very institutions of America he opposes and speaks out against, Malcolm’s final day alive is approached by Spike Lee with a dreamy air of surrealism, and its impossible to watch it without any sense that it’s meant to convey that Malcolm expects anything other than his own death- even if he doesn’t know the hour of its coming.

This is the one story on the list whose death transcends merely confronting the individual’s mortality, but uses that mortality itself as a political and social allegory. America is violently resistant at times to hearing uncomfortable truths, and makes martyrs of more heroes than it raises up in their lifetimes. It’s a timelessly important film I recommend everyone watch.